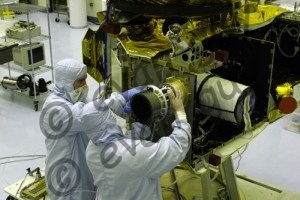 I was contacted in 2004 by a genius guy who is high up in a space sciences organization. He described significant technical hurdles they faced for a 2006 launch of a spacecraft mission to Pluto! They needed 4 electrostatic grids to be thin, lightweight, able to withstand 45g vibration, and be 90% open space in the grid (think window screen). We met and he described trying to “grow grids” using electro-chemical plating process. The resulting sample couldn’t come close to making it through the 45g vibration test. Apparently, flying through deep space for 9 years at 43,000 mph isn’t the problem–it’s the launch out of our atmosphere. I was told that it’s violent. Tough test for super delicate scientific instruments.

So we sit down and this guy says, “why don’t we just do this out of solid material and drill the holes?”  I immediately told the guy it wasn’t happening. I said, “it seems simple, but if you calculate the time required to drill all of those holes, you’ll be there for months”. It turns out, it was 99,820 holes per part and 4 parts!!  That’s 400,000 drilled holes!

This genius scientist says, “OK, think about it over the weekend” and left it at that.  You have NO idea how smart this guy is! I could line up the ten smartest people I know and blend their smarts. Nope, still no Dave M! Not just space sciences smart, smart at everything. Doesn’t matter what it is, the guy will out think ya!

I went home and thought about it and picked up a pencil and a calculator. He wanted little tiny holes, .0135″ diameter (about the thickness of a business card), through a .015″ thick grid. I started running calculations and came up with a 70,000 rpm air spindle in the CNC machining center, .6 seconds per hole.  That’s STILL 16 hours of drilling per part, 4 parts to be done. I called him on Monday and said, “maybe”.

These are TRICK parts! They start out as 7″ diameter solid aluminum chunks and are then carved down to delicate concentric parts. Each is .015″ thick (business card thickness) and has 99,820 holes drilled. The holes are .0135 diameter and the connective material left between holes is only .0015″–less than two thousandths of an inch.

I designed and built a lot of specialized tooling for this crazy deal. You can’t just drill through the part, it’ll leave a nasty burr on the backside of the hole when the drill breaks through the inner diameter surface. So I designed and built an intricate internal expanding mandrel with a sacrificial liner. This is a liner that’s beneath the inner surface of the grid. Using it eliminates the burr on the backside of the drilled hole.

This is high failure work. If anything goes wrong while drilling 99,820 holes over a 16+ hour period, you get to go all the way back to the very beginning. Yep, solid aluminum!  If you break a drill, you can’t go pick it up where you left off, the super thin screen tears open.  So you go all the way back to machining solid 7″ aluminum AND the sacrificial liner, too! And I scrapped plenty of these!  I drilled well over a million holes in this project! And it’s very hard on the machine, doing a millions of repetitive moves over a very short distance causes bad ‘brinelling’ type wear in lead screws and guide ways. Ain’t no free lunch!

But wait, the link to this page mentions FIVE parts, yet I’ve only written about four parts. I was all finished with the 4 electrostatic grids and everyone was happy. It was, by far, THE most stressful project I’d ever undertaken. There was a very narrow launch window for the spaceship launch, and time was getting short. I told them that I’d never work for them again. I was relaxing on a Friday afternoon right after delivering the last one. The phone rang. “Evan, we have an ENORMOUS problem and you’re the only one who can fix it!”  Talk about a buzz-kill. The primary component, the part to which my 4 grids mount, was destroyed by the plating shop! And it’s a VERY complex part! It took their machine shop 7 months to build one part. The part has an internal sphere that contains 167 strange little grooves. Each one has its own unique angle. The top of each groove had to be theoretically sharp, no bluntness, and no burrs.  SIGH.  I programmed it in MasterCam and built 3 of these. The stress imposed on me was 10 times greater than the 4 grids. By this time, they were REALLY uptight about schedule. I was about to strangle some engineers and astrophysicists!  Finally, they assigned a kind and gentle female engineer (who happened to be a running buddy) to be “the Evan Guy facilitator”. She would come visit and would speak very calmly to me and would ultimately check on progress and get their answers without me telling her to leave. It was BAD, but I got it done!! There are pictures of the 5th part at the bottom, below the grid pictures. 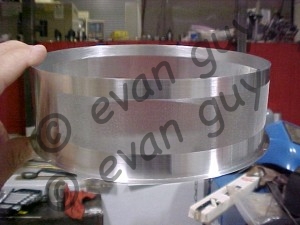 It started as 7″ solid material. Machined down to the thickness of a business card, THEN 99,820 drilled holes! This is 1 of 4 of these. 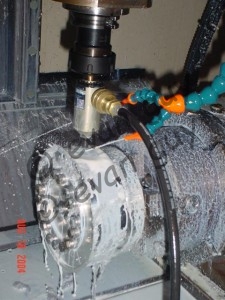 I mounted a 70,000 rpm air spindle in the CNC machine and got the drill time down to .6 seconds per hole. It still takes 16 hours to drill all the holes! 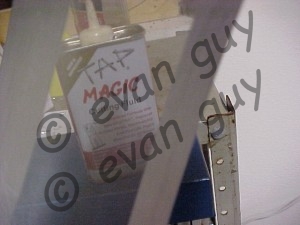 This is too cool. The Tap Magic can is being viewed through the zillions of tiny drilled holes! It’s  90% open! 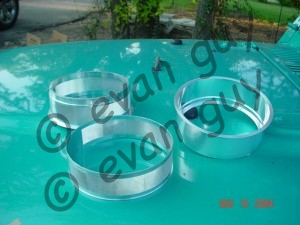 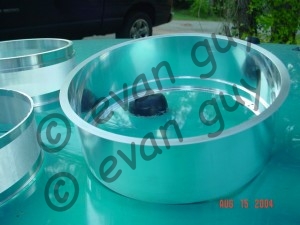 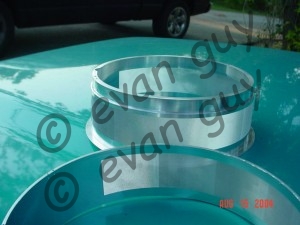 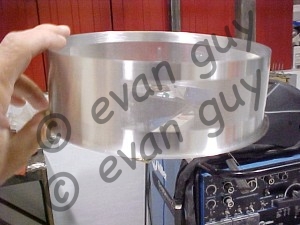 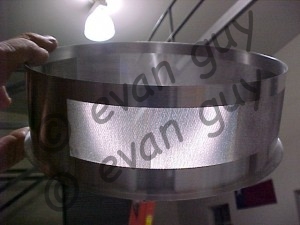 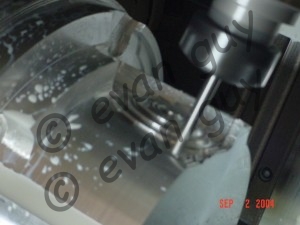 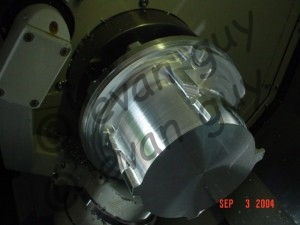 Cylindrical feature of the outside of the 5th part, before spherical machining. 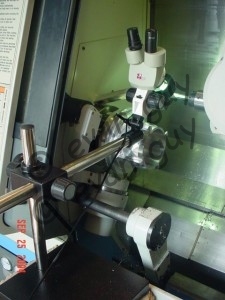 The hollow internal spherical surface has 167 unique grooves, each with a different angle! Each has to be theoretically sharp, no blunt edge, no deburring allowed, yet no burrs allowed, either! That took me a long time to figure out and perfect. The internal grooving tools had to be very precisely calibrated, enough so that I had to mount my microscope inside the CNC machine for calibrations! 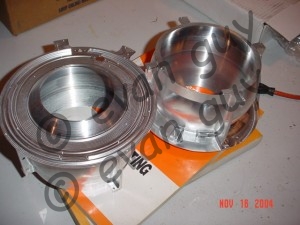